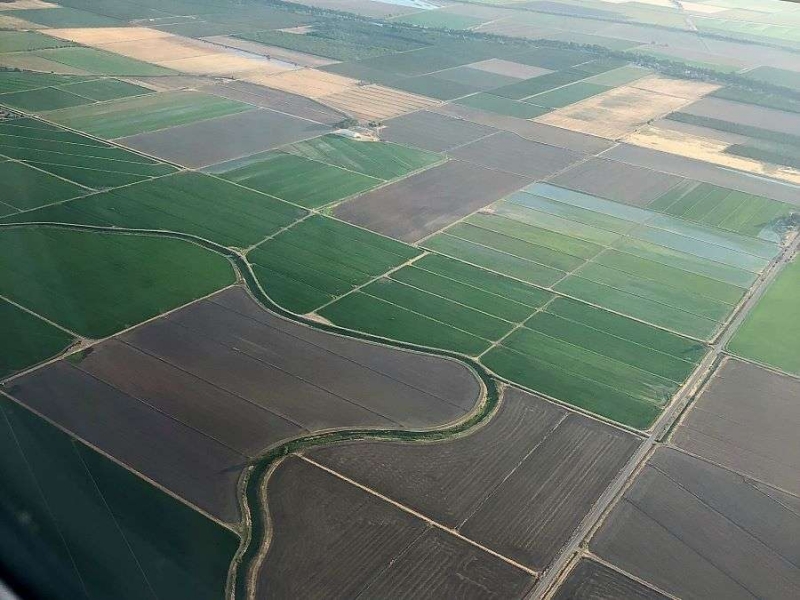 
Looking at a map of the Sacramento Delta, you’d think that you’re looking at a giant wetland. Or, at least I did, and that’s what it used to be. Today, the Delta is a highly modified landscape that hardly resembles a wetland. Nearly every aspect of the land and water are regulated for agriculture, drinking water, shipping, and highway infrastructure. Upon visiting the Delta and witnessing the landscape modifications, it became difficult for me to see a landscape full of roads, farms, and water diversions as a migratory corridor for fish traveling between mountain streams and the ocean. These contrasts illustrate the complex strains on the land and water within the Delta and the difference in needs between humans and wildlife.

This summer, my task as a fellow for the US Fish and Wildlife Service’s Directorate Fellows Program (DFP), is to conduct a population analysis of steelhead Trout living within the Sacramento Delta watershed in the Central Valley of California. Conserving steelhead in the Central Valley is a difficult task in part because steelhead migrations require many miles of connective stream habitat in a place where water usage is disputed and management practices can cause streams to flow backwards, lead to dead ends, or run dry. Steelhead populations are also difficult to evaluate because they belong to the species Oncorhynchus mykiss  which utilizes several different life cycle strategies to survive. To begin my task of designing a population analysis, I spent the first two weeks of my position learning about the water-landscape of the Central Valley and the natural history of steelhead.

To learn how steelhead move through the watershed, I took a trip to Lodi, California, where my team gave me a tour of the Delta. Historically, steelhead reproduced in streams on the western slopes of the Sierra Nevada Mountains. Today, dams form barriers, blocking fish from accessing most of their historic reproductive habitat and causing fish to reproduce below dams. Mountain streams flow into the Sacramento River in the North and the San Joaquin River in the South then meet at the Delta where they branch out and form a maze of water and islands. The Sacramento Delta is an estuary in the middle of California about 40 miles as the crow flies from the mouth of the San Francisco Bay. Before European Settlers developed the region for agriculture, it was a network of seasonally flooded wetlands and home to the Me-Wuk (Miwok) people. Since then, the Me-Wuk people have been forcibly removed, the wetlands have been drained, the waterways have been channelized, and levies separate land and water. Water is extracted and moved within and away from the Delta in a complicated manner which alters water quality and creates treacherous migratory paths for steelhead. My team showed me a number of places where steelhead can get lost or trapped in the system and methods used to guide fish towards safer paths.

The name “steelhead” is one of the common names of the species Oncorhynchus mykiss, or O. mykiss for short. O. mykiss is a species of fish that uses multiple lifecycle types. Under ideal conditions, O. mykiss are born in freshwater streams that are cold and highly oxygenated. At some point in the life of each fish, it will become either anadromous, adfluvial, or residential. Anadromous O. mykiss, also known as steelhead, will migrate to the ocean where they will spend part of their life while adfluvial fish will migrate only part of the way and live in the bays that connect the Sacramento Delta to the ocean. Anadromous and adfluvial fish can start their migrations away from their home streams as mature or immature fish and will return to those streams to reproduce. Residential fish, known as rainbow trout, have much simpler life cycles, living their entire lives near their home stream. The offspring of residential fish can become anadromous and vice versa. The variability in life cycle strategies allow O. mykiss populations to persist in a variety of habitat conditions. However, the migratory strategy of steelhead, which requires connective habitat throughout the Delta, is diminishing, especially in the southern populations.

Conserving Central Valley steelhead is as simple a restoring reproductive habitat and migratory corridors. Humans are reliant on water extractions and diversions for electricity, agriculture, and drinking water, meaning that returning habitat to pre-industrialized conditions would leave communities throughout California without vital resources. Instead, water resource and wildlife management agencies are working together to develop water management strategies that meet the needs of humans and sustain steelhead populations. My work this summer is to describe steelhead population trends to inform future water management plans. Stay tuned for updates as I work through my project over the next 7weeks.

Image Description: A view of the Central Valley's extensive agriculture as seen out of my window while flying into the Sacramento Airport.